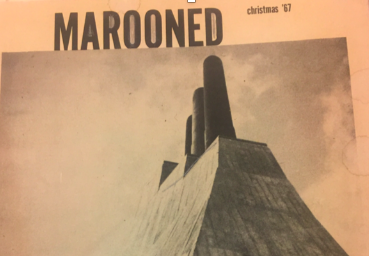 In October 1964, after the formal opening ceremonies for Scarborough College, Varsity news reporter Margaret Sisson confidently reflected, “Scarborough College…will be able to provide students with a source of identity within the University structure” (Sisson, 1964). While the first classes of Scarborough College certainly actively negotiated (and fiercely contested) their “Scarborough Identity” (Marooned February 1967), building a collective student identity and community miles away from the historic Queen’s Park campus has proven to be no small task. In fact, our collective identity is constantly being renegotiated. One former UTSC student commented in 2015 that our community identity is often hindered by an “inferiority complex”; that UTSC represents a “second choice” school for students (Sultan, 2015). Although even early data proves that UTSC as a “second choice” is and was not the case, where does this sense of a “inferiority complex” come from? It appears to have some roots in the earliest moments of our history.

Scarborough College opened its doors to 190 full-time students in the fall of 1964 — but not in the “rural landscape” of Scarborough, rather in the old Biology building on the St. George Campus. (Decade Book: 24; Landscape Architecture: 224) Construction strikes had delayed the progress at the Scarborough building site and temporary quarters were hastily found.  At a Council Meeting September 1965, the then Principal of the college, A.F.W. Plumptre, remarked that the opinion on the quality of the temporary quarters was divided (some marvelled at the speed with which the UofT responded and others felt the condition of the accommodation to be demeaning) and that they were being referred to as “Scarab College.” He urged colleagues to “accept Scarab, ugly and venomous though it certainly seemed” and to look “forward to the novelty, beauty and peace of our proper home in Scarborough where, “we shall indeed find ‘Tongues in trees, books in the running brooks, Sermons in stones, and good in everything.’” (Plumptre: 2-3).

By February 1967, Scarborough College’s first student magazine: Marooned, was launched. The question of the “Scarborough Identity” consumed many of its pages (Marooned, February 1967). In fact, its very title is indicative of the feeling of being “marooned” in a metropolitan suburb far, far away. The December 1967 issue reported on public opinion that had appeared in local newspapers regarding Scarborough College. While some commented on the enviable natural environment and admired the building architecture, one quote from the Toronto Daily Star asserted that Scarborough College students, representative of a working-class and uneducated demographic, were doomed to academic mediocracy: “The danger in sending mostly poor students to these colleges is that they are less likely to succeed..” (Marooned, December 1967).

To accompany this article, the editors provided an aerial shot of campus with the caption “U of T Dumping Grounds” (Marooned, December 1967). Certainly not the romanticized rural beauty and peaceful home envisioned by Principal Plumptre. Was this an effort on the part of student editors to provoke strong emotions and ignited student motivation to form a strong sense of student community. We can only speculate. Scarborough College would be as socially, culturally, and academically successful as Queen’s Park; Scarborough would not be remembered as “U of T Dumping Grounds” (Marooned, December 1967).

What is of note is that despite our growing autonomy within the larger UofT ecosystem and the growth to city status of our suburban home, this issue of identity persists to varying degrees throughout our history and manifests not only in the student experience but also in the experience of faculty, staff and the larger community plagued as we are by media supported labels such as Scarberia and Scareborough. Topics certainly worthy of further investigation….

“Highland Creek? Wasn’t Anything There”: The McLean Estate and UTSC in the 1960s