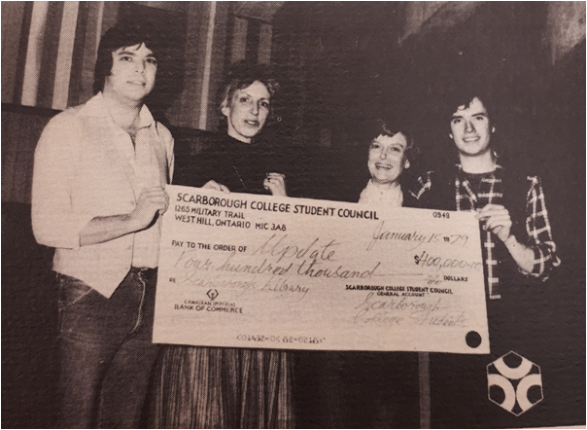 "Scarborough College Student Council president, Sheldon Leith, handing a symbolic cheque of $400,000 to Lee MacLaren, the Director of the Department of Funding at the University of Toronto.” Scarborough College Bulletin, January 1979.

Amidst the COVID-19 pandemic, we’re lucky to have online libraries available for our entertainment needs from the comfort of our own homes. In fact, can you imagine what it’d be like without a library, especially if you were a student? Scarborough College didn’t have a proper library until 1982, upon the opening of Vincent W. Bladen Library. Prior to the Bladen Library, Scarborough College had a temporary library space of 17,000 sq. ft., meant to originally serve around 200 students back in 1966. By 1979, there were around 4000 enrolled students, and the demand for study spaces and materials led to a dire need for a library upgrade. The situation had become so deplorable that 85,000 books and microfilms were stored in cafeteria kitchens, the delivery tunnel, in a portable building, two houses on Ellesmere Ave., and a barn where some of the books developed moulds and fungi (Ball, 1979).

The students’ fight for a new library may arguably be one of Scarborough Campus’ greatest student actions in its history. A student referendum of Fall 1978 sparked the beginning of the student-led movement for the new library’s construction. Of 3,200 votes, an overwhelming majority agreed to pitch in an additional $10 to their annual tuition fees for the library, with a total of $400,000 (Spencer, 1979).

The Scarborough College Student Council (SCSC) took action by placing pressure on the university administration. Sheldon Leith, president of SCSC, personally handed a symbolic student-paid $400,000 cheque to Lee MacLaren, the Director of the Department of Funding at the University of Toronto in 1979 (“Students Praised,” 1979). Student complaints and urge for action covered student newspapers as well. It took a few years due to funding conflicts and construction strikes, but the successful student-run campaign resulted in the completed construction of the Vincent W. Bladen Library on April 24th, 1982. This student-led effort is now a living legacy as UTSC’s current campus library. Although the physical library itself is now closed due to the pandemic, resources are still all electronically available at https://utsc.library.utoronto.ca/.

Winter 1966: A Day in the life of a Scarborough College Student

History of the University of Toronto Scarborough @historyofutsc ·
18h