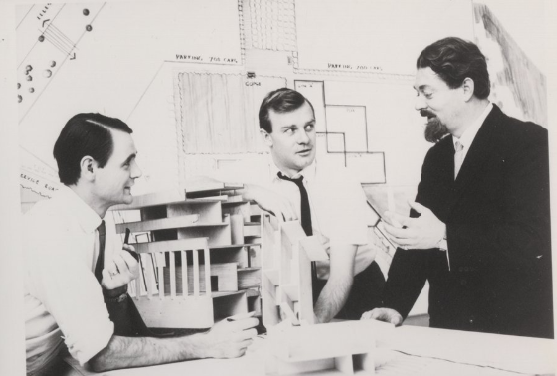 The architects of UTSC: John Andrews is pictured in the centre alongside landscape architect Michael Hough (left) and architect-planner Michael Hugo-Brunt (right).

Terms such as ‘Aztec Temple,’ from the Toronto Daily Star, and ‘Fallout Shelter,’ from Dr. D. Abbey, were a few that were displayed on the pages of Marooned Christmas ‘67 edition to describe the appearance of the original buildings of UTSC. At the same time, the design of the campus was praised in the architectural world, with features in Architectural Record, The Canadian Architect and the Canadian Time magazine (Taylor and Andrews, 175). When asked about the strong opinions that his building inspired, architect John Andrews remarked, “At least, it’s a definite reaction. I would hate to have people walk in and out without forming some kind of opinion.” (Williams and Rinne, “Interview with John Andrews”). Alongside these strong opinions, another legacy of the campus is its role in building the reputation of John Andrews.

The UTSC campus, which was initially referred to as Scarborough College, began with the concrete structures of the Humanities Wing, Administration Building/Meeting Place, and Science Wing. This collection of buildings is also called the Andrews Building, named after the young architect who designed the campus, John Andrews. From its opening in 1966 to the early 2000s, the buildings designed by John Andrews made up the entirety of the campus. So, who was this integral figure in the design of UTSC and how has UTSC impacted his life in return?

Six weeks of planning alongside landscape architect Michael Hough and architect-planner Michael Hugo-Brunt produced the proposal of Scarborough College (Taylor and Andrews, 28). Their impressive work convinced the Board of Governors to officially appoint Andrews as the architect for the new campus, alongside the Page and Steele firm (Taylor and Andrews, 28). As UTSC’s original architect, it is Andrews who can be credited for the convenient internal tunnels connecting the buildings, allowing you to stay nice and dry as you run between classes, or the skillful placement of common spaces which maximized sunlight and views of the valley while protecting against harsh winds (Taylor and Andrews, 34-5). These decisions were in line with his philosophy that buildings are “the setting for human action and experience” and should be designed to address social needs (Taylor and Andrews, 19).

After a lifetime devoted to creating buildings tailored to its users, John Andrews passed away in March 2022. However, his legacy lives on in the buildings he designed, including the ones that started it all here at UTSC.

Williams, Rick and Mike Rinne. “Interview with John Andrews.” In Marooned 2, no. 1, Christmas ’67.

“We’re Going to Move Against Your Moms and Dads”: The Black Panther Party Comes to Scarborough College

History of the University of Toronto Scarborough @historyofutsc ·
6h