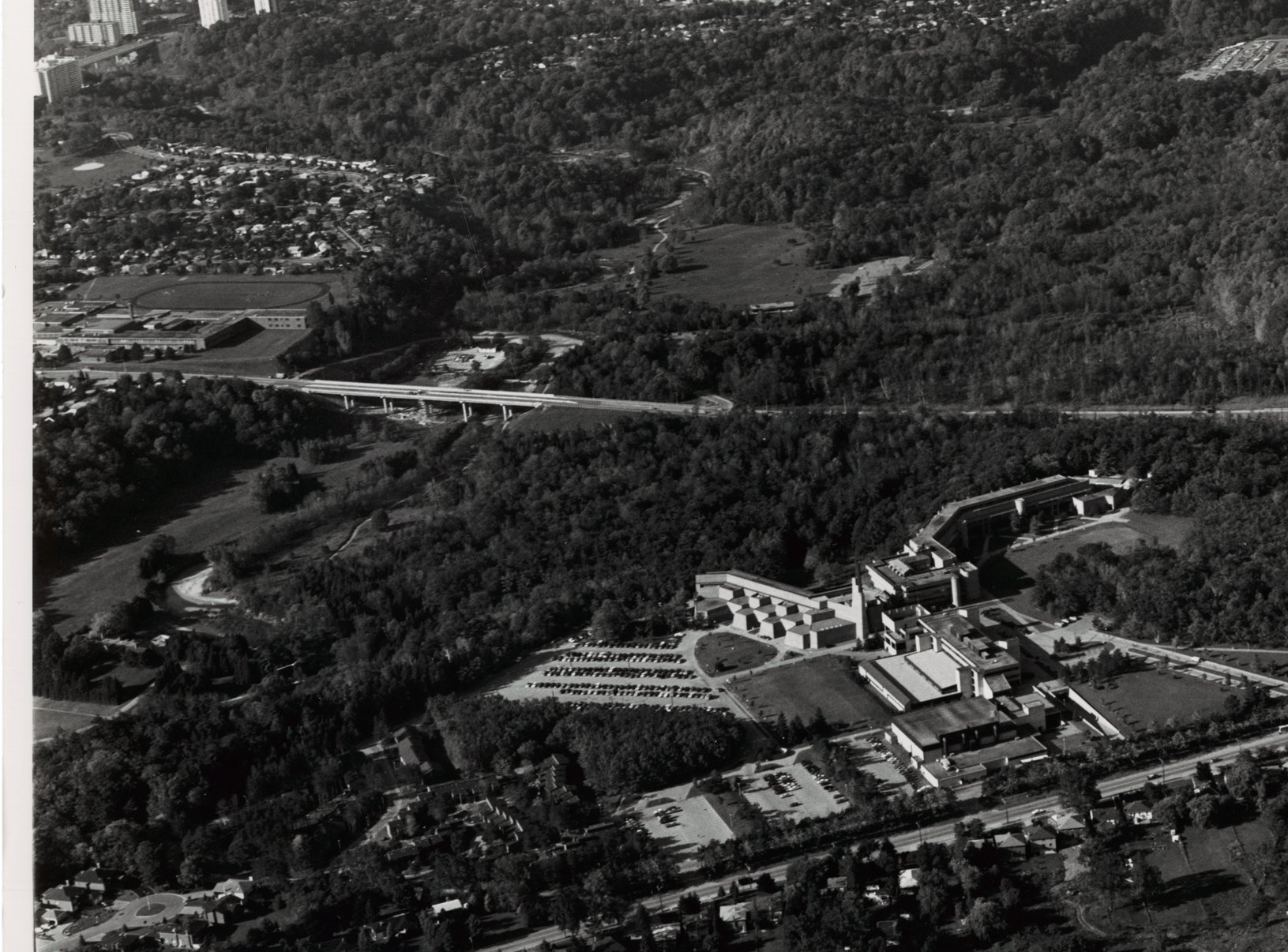 “… let us accept Scarab, ugly and venomous though it certainly seemed when we first visited it last July, looking forward to the novelty, beauty and peace of our proper home in Scarborough where, ‘exempt from public haunt’, we shall indeed find

‘Tongues in trees, books in the running brooks,

Sermons in stones, and good in everything.’”

This was a remark made by A.F.W. Plumptre, the second principal of Scarborough College (now University of Toronto Scarborough), during a Council Meeting in September 1965. He oversaw the official opening of the College in October 1966, and though his words ultimately end on an encouraging note, they also reflect an unease with Scarborough’s location. Indeed, bordered by residential areas on one side and untamed forestry on the other, the College’s rural environment was a far cry from the central, urban location of the St. George campus. This presented a variety of challenges regarding transportation, accessibility, reputation, and institutional identity, among others. For students, staff, and faculty alike, then, Scarborough College appeared to be in the literal middle of nowhere, and Professor Plumptre was correct in predicting that this would be a hurdle that the College community would have to work together to overcome. What Professor Plumptre couldn’t have predicted, though, is how useful this woodland environment would be for certain fields of study, particularly that of astronomy.

The combination of Scarborough’s relatively small population and expansive greenery created superb conditions for viewing and studying the night sky. The College was quick to capitalize on this, and, in early 1980, the Department of Astronomy welcomed the first true star of its Observatory: the 12-inch Questar telescope (Harford 1980, 2; MacDonald 1986, 15). Equipped with a modern spectrometer and photometer, the telescope was then at the cutting edge of technology, and, according to one observer, revealed “an astonishing number of deep-sky objects”: to name a few specific examples, Jupiter appeared “beautiful beyond description”, and Saturn was viewable “with a clarity I have never before experienced” (Scarborough College, University of Toronto, 1980, 48; MacDonald 1986, 16). Moreover, such astounding sights weren’t reserved for faculty alone! In the 1980-81 academic year, the Department of Astronomy introduced a new “astrophysics laboratory” course titled “Practical Astronomy” (ASTB02) in which students had the opportunity to gain “practical experience in astronomical photography, spectroscopy, and photometry” using the College telescope (Scarborough College, University of Toronto, 1980, 48, 50). Students and scholars were thus both able to take part in the latest scientific breakthroughs at Scarborough College, and thereby situate themselves at the forefront of astrophysical innovation and discovery in Canada.

The Scarborough College Observatory continued to add to its technological repertoire into the new century, and, now known as the UTSC Observatory, has earned quite a bit of fame in recent years for various discoveries. In 2016, for example, as part of the Western University-established All-Sky Camera Network, the Observatory webcam captured a “bright fireball” streaking across the night sky, garnering popular media attention (Campbell 2017; CTVNews.ca Staff 2016). In 2018, the Observatory captured video of a meteor that “may have landed between Saint Joseph and Crediton, Ontario” (Burrell 2018). According to Peter Brown, a Professor at Western University associated with the Southern Ontario Meteor Network, “the study of these meteors is important, as they offer hints at how our solar system formed” (Burrell 2018). In this way, UTSC was able to bridge the gap between Scarborough and the stars, and thereby contribute to the effort to learn more about the universe and our place in it.

Unfortunately, the UTSC Observatory ceased operations in 2019 “due to new university priorities”; moreover, according to Hanno Rein, an Associate Professor at UTSC in the Department of Physical and Environmental Sciences, “multiple construction projects” in Scarborough “severely deteriorated the observing conditions” and left the Observatory helpless (UTSC Observatory 2019; Hanno Rein 2019). This closure was a significant loss to both the UTSC community and the scholarly community at large, but the contributions of the Observatory to scientific advancement remain a point of pride; indeed, the discoveries of the Observatory allowed us all to reach for the stars, if only for a little while.

History of the University of Toronto Scarborough @historyofutsc ·
20 Jan

1/2 Happy Lunar New Year! Also known as the Spring Festival in China, Tet Holiday in Vietnam and Seollal in Korea, this festival is an important holiday to these countries as well as the many East Asian communities across Ontario.

Happy #LunarNewYear! This photo of a child feeding a rabbit at a nursery in the General Engineering Company's munitions factory in Scarborough during World War II is a good reminder this Year of the Rabbit to show yourself and others some care, compassion, and tenderness. 🐇

The Black History Month Kick-Off Brunch is celebrating 35 years! Join us, with our lead sponsor @TD_Canada, as we celebrate w/ the theme "OUR ROOTS: Black History in Canada."